Turning on and off a light, the smart way

One of my passions in life is integrating things together. So, as a summer project, I decided to try my hand at DIY smart home automation with electronic circuits and sensors. And I’m here to say that it’s easier and cheaper than you think. Here’s a tutorial I wish I had before I started.

The first thing I’ve tried is to turn on and off a light with the push of a button. All you really need is a couple of batteries, a light, a button and voilà!

Not very interesting… But it’s okay, we’re going to do it the smart way. 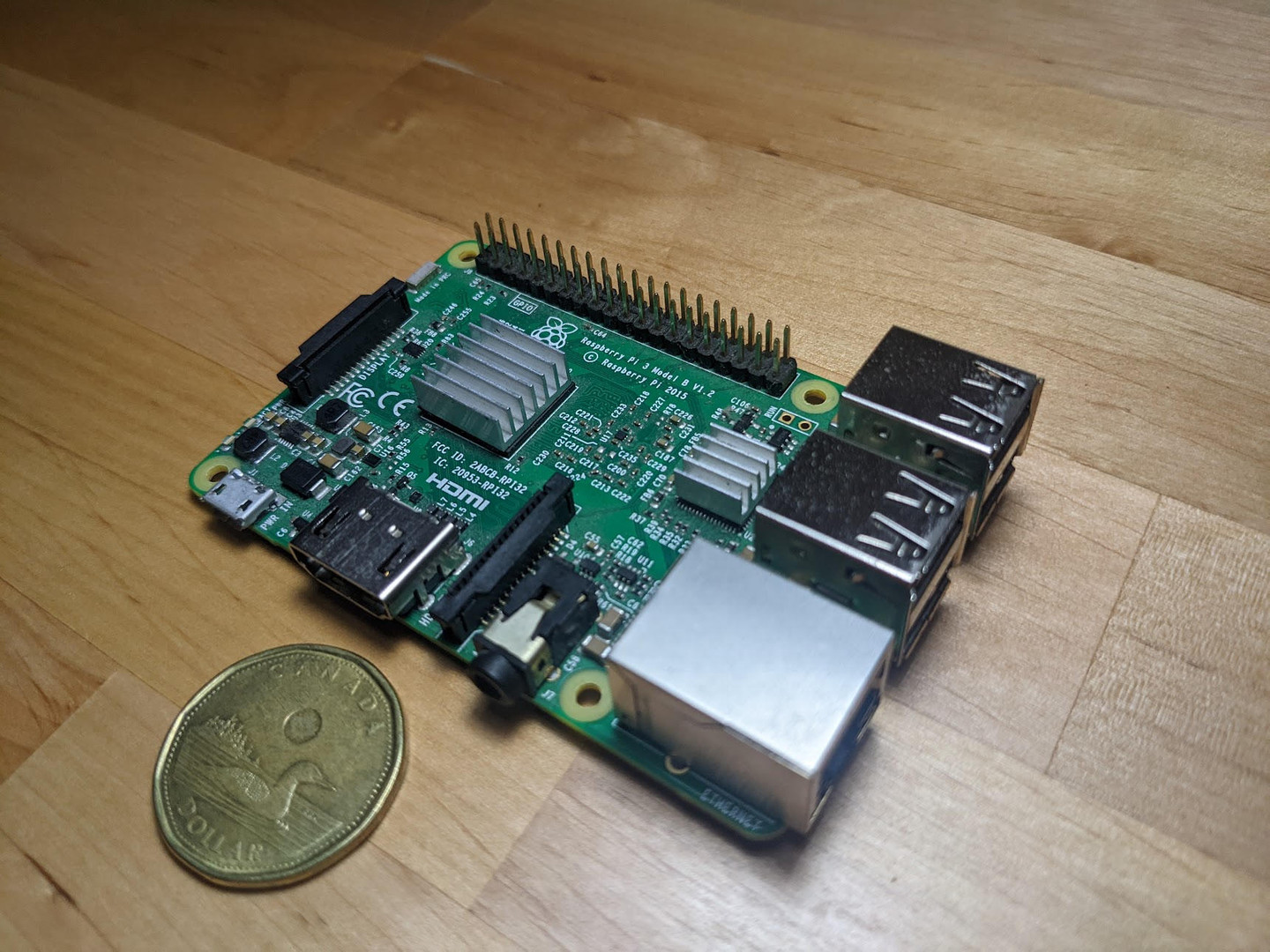 This is a Raspberry Pi. It’s a fully-fledged computer that sells for $45 CAD in its base variant. For its price, it’s remarkably well furnished. Besides being able to run the Linux operating system, it has:

It’s the GPIO header that’s going to be particularly interesting for automating. The GPIO header is a series of 40 pins that either:

Each pin is typically identified by a number. Here’s a schematic identifying those pins (this will be useful later): 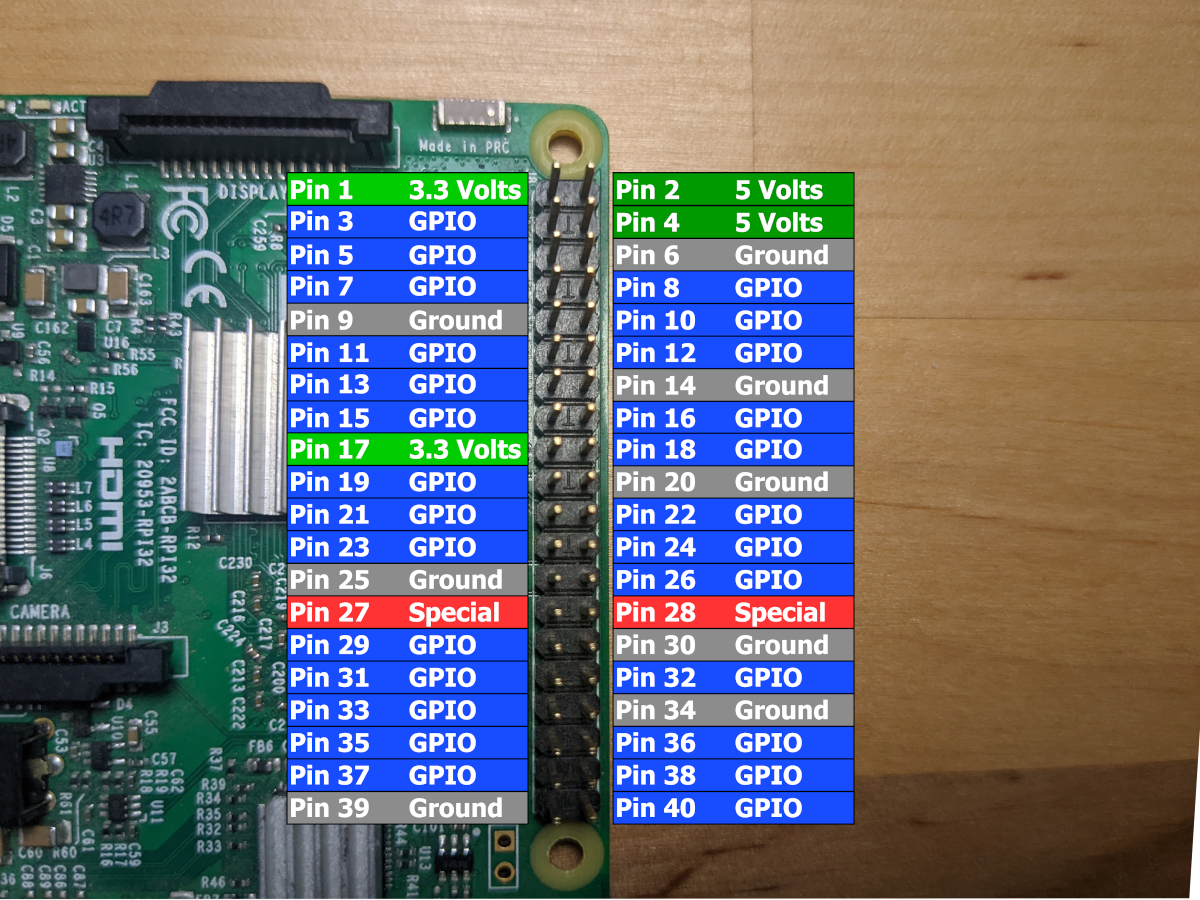 There’s an alternative numbering schema possible, but we will keep things simple in this tutorial. Also note that GPIO pins can support at most 3.3 volts, so you cannot plug a 5 Volts pin to a GPIO pin. Very important to know if you don’t want to fry your Raspberry Pi…

When it is said that an electrical source provides 3.3 Volts, it is describing the difference between the high potential energy state (referred as +, 1 or HIGH) and the low potential energy state (referred as -, 0 or LOW). In the Raspberry Pi, the ground pins represent the low state and the pins that provide 3.3 Volts have a potential energy relative to that ground. The pins identified as GPIO can be controlled via software to either output a HIGH or LOW state, or to be able to read what voltage is applied to the pin. 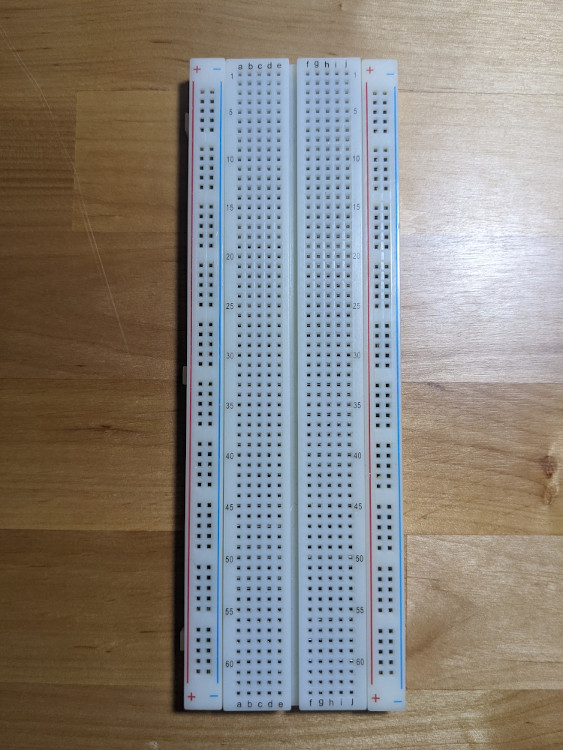 Breadboards are a series of holes connected in the back by wires in a specific manner. People designing the circuit would then take wires to connect some of the holes together. From the back, there are two paths that current can take on a breadboard. If we focus on the left half of the board, the current flows up and down on the two leftmost columns of holes. They typically carry the + and -. Then, the five rightmost sets of holes are connected into rows. Each row is independent from the others. The same layout is mirrored on the right side of the breadboard. 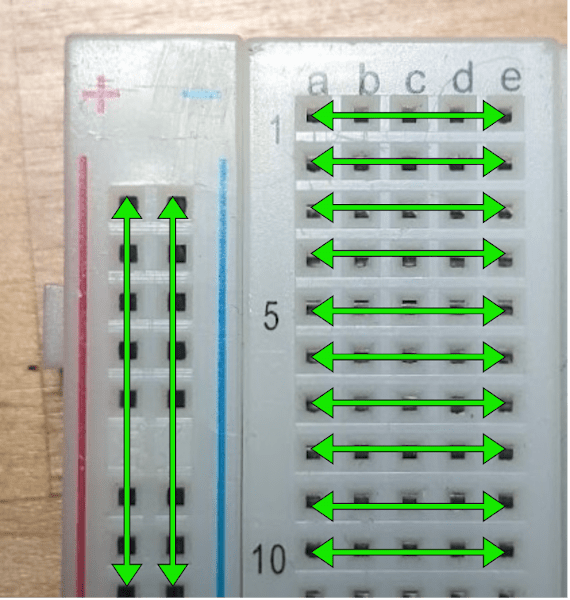 It’s typical to connect the power source to the + and - columns to the columns, then use small wires to carry the current from the two columns into specific rows, and finally connect the various electronic components on the rows. Here’s an example of a closed circuit, meaning the current flows from the 3.3 Volts on pin 1 directly to the ground on pin 9: 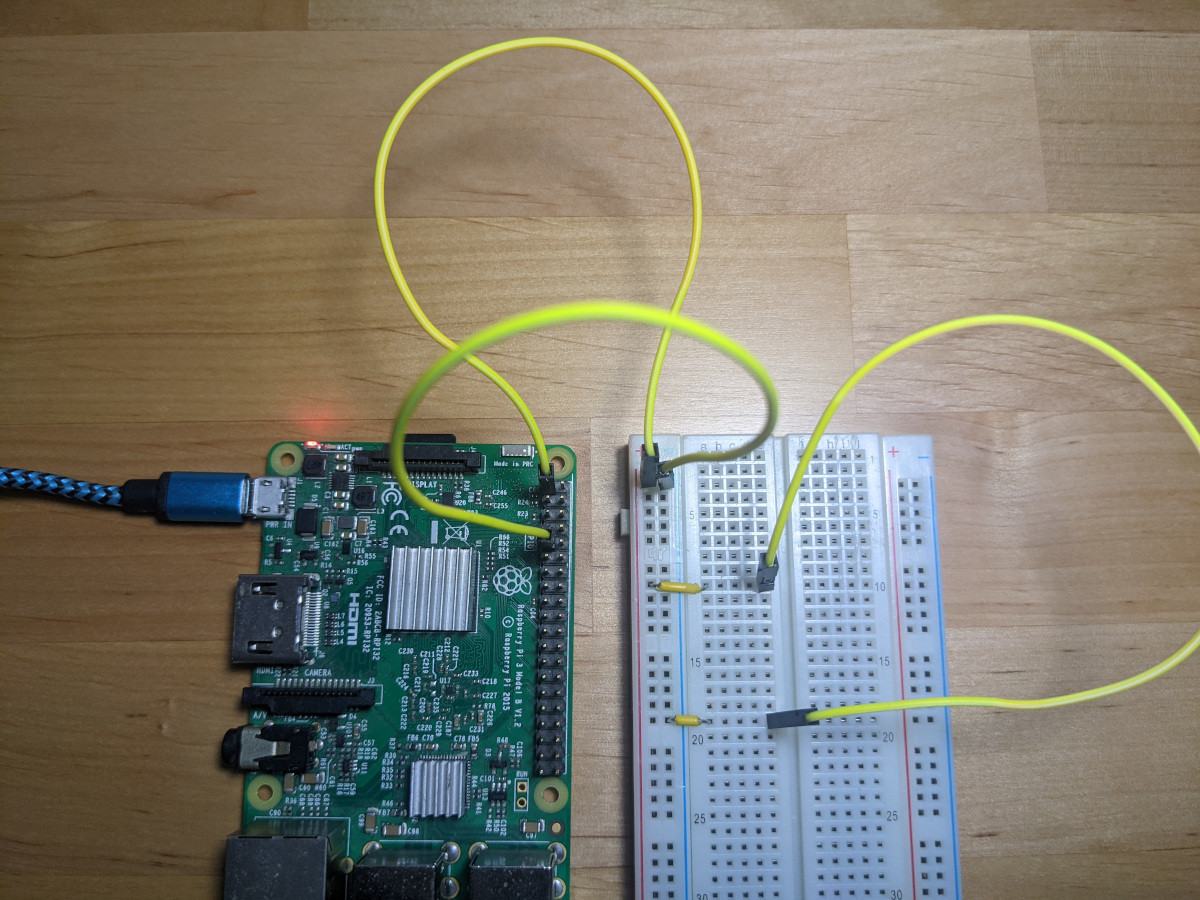 Now that we have established the basics, we will start by turning on and off a light from software. In order to do this, we need to be able to switch between sending a HIGH and LOW signal to the light using a GPIO pin that is controllable over software. GPIO pin 3 will be used for that purpose, whereas pin 9 will be the ground or LOW. Note that any pins identified as GPIO and ground could have worked. Also, an interesting standard to know is that the long pin on the light should be connected to the +. Lights that you buy should be compatible with a 3.3 Volts signal, otherwise you will need resistors in your circuit. Here's the schematics of the first circuit. 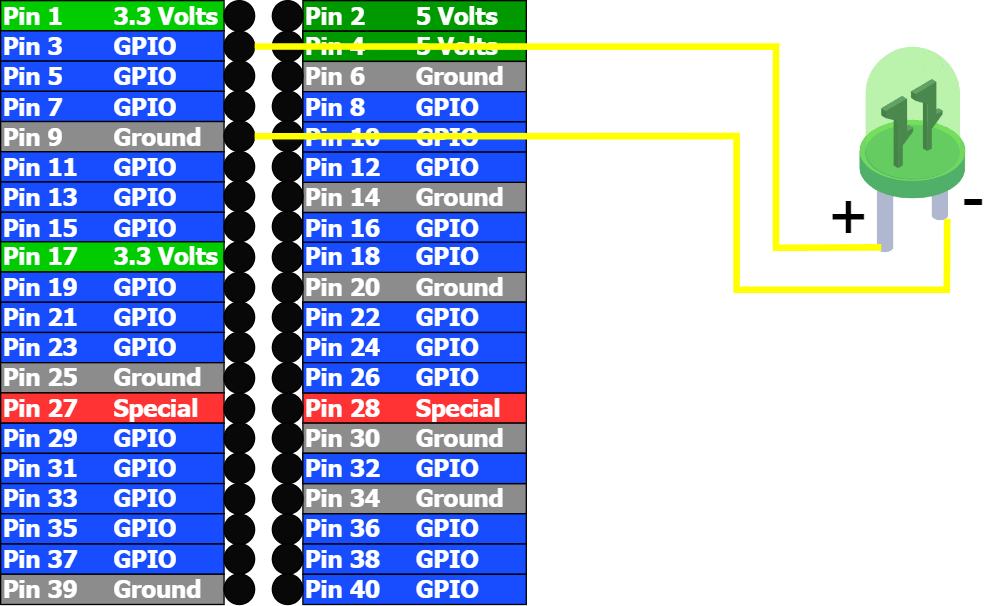 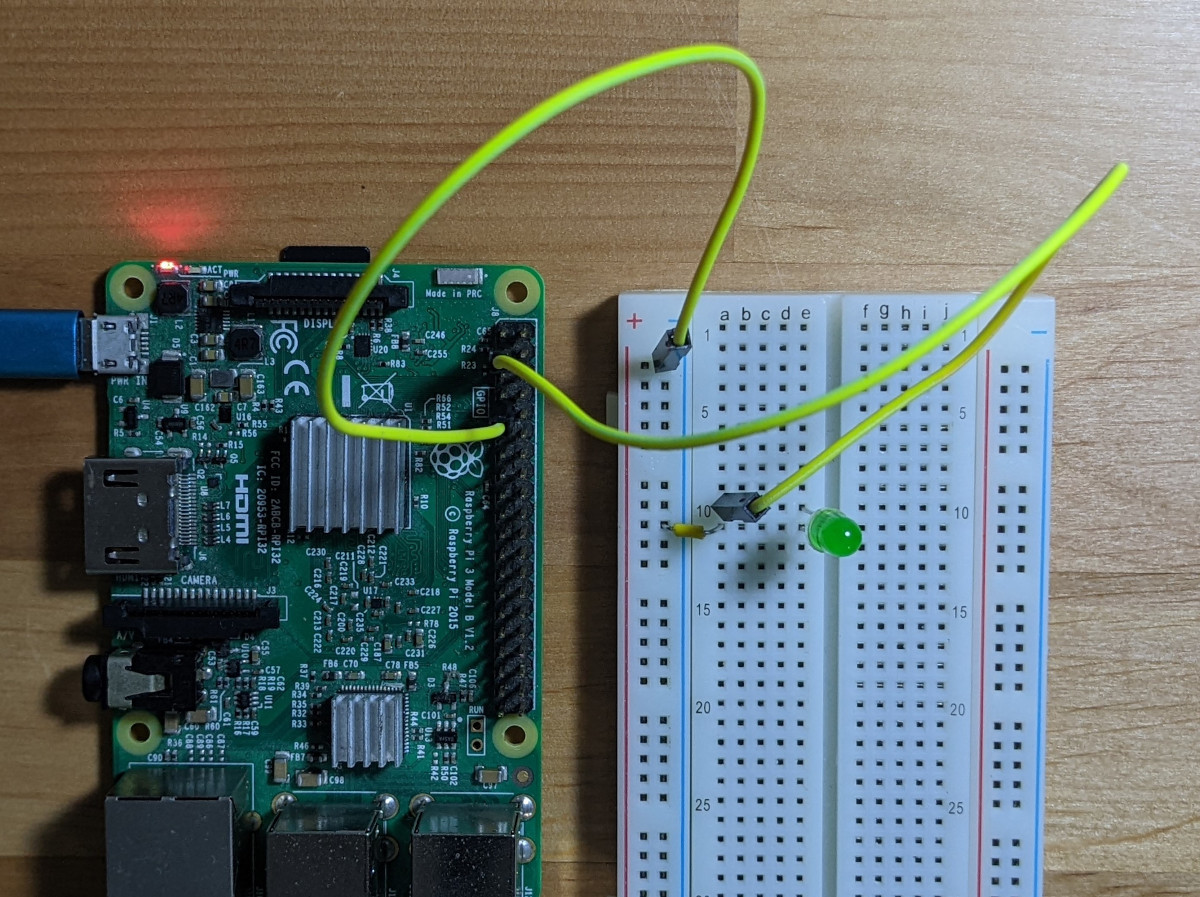 Then, we’ll switch our attention to software. We will be using the Python programming language to control the state of the light, but nothing advanced. There are many tutorials to install Python if it’s not already installed on your distribution of Linux. You will then need to install a library called RPi.GPIO to be able to control the GPIO pins. To do so, run the following command: pip install RPi.GPIO

Here’s the code that we will use to turn on and off a light:

And here’s the outcome!

A button simply closes the circuit when pressed. Whatever voltage applied on the button will not go through when the button is not pressed, and will let it through when pressed (effectively acting as a wire). We will need to send 3.3 volts to the + side of the button, and connect the - side of the button to a GPIO pin that’s able to sense the voltage coming out of the button. When the button is going to be pressed, the GPIO will be able to see that 3.3 volts (or a HIGH signal) is received from the button. For this purpose, we will be using pin 1 for the 3.3 volts signal and pin 13 as the voltage-reading GPIO pin. Again, any GPIO pin would have worked. Note that with this particular model of button, the underneath shows which are the positive and negative poles. 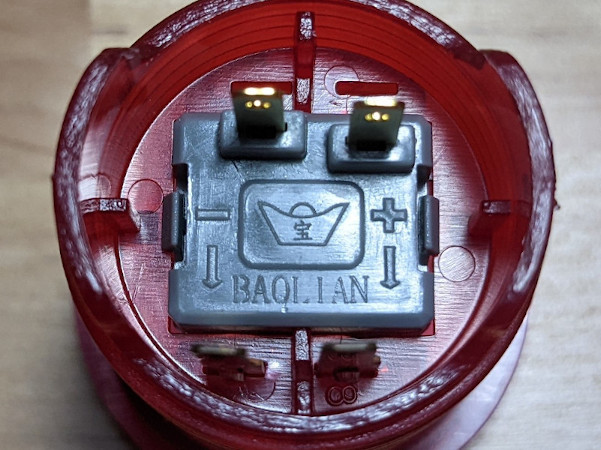 Here’s the schematics we’ll implement. Note that there’s no change to the light circuit. 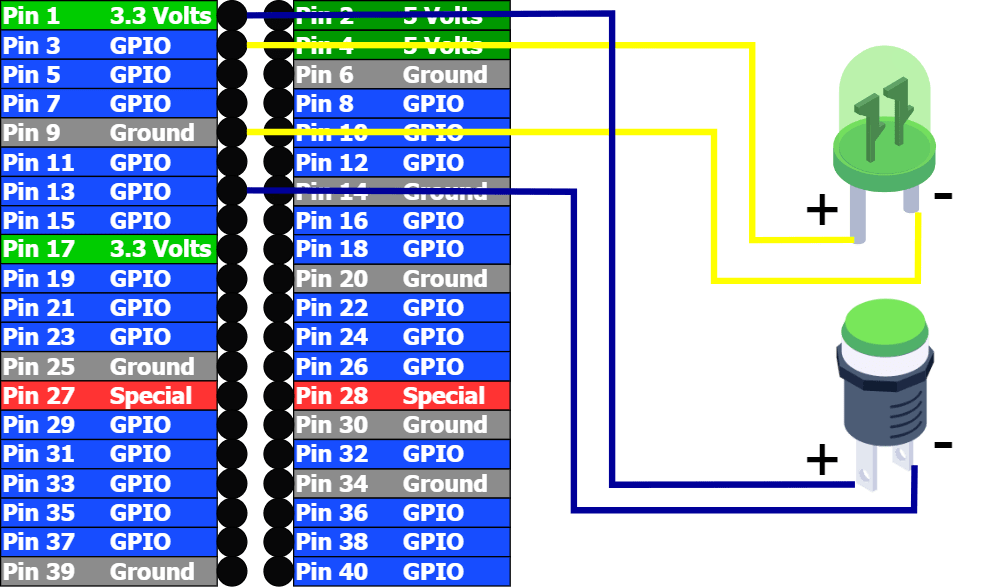 And here it is on the breadboard: 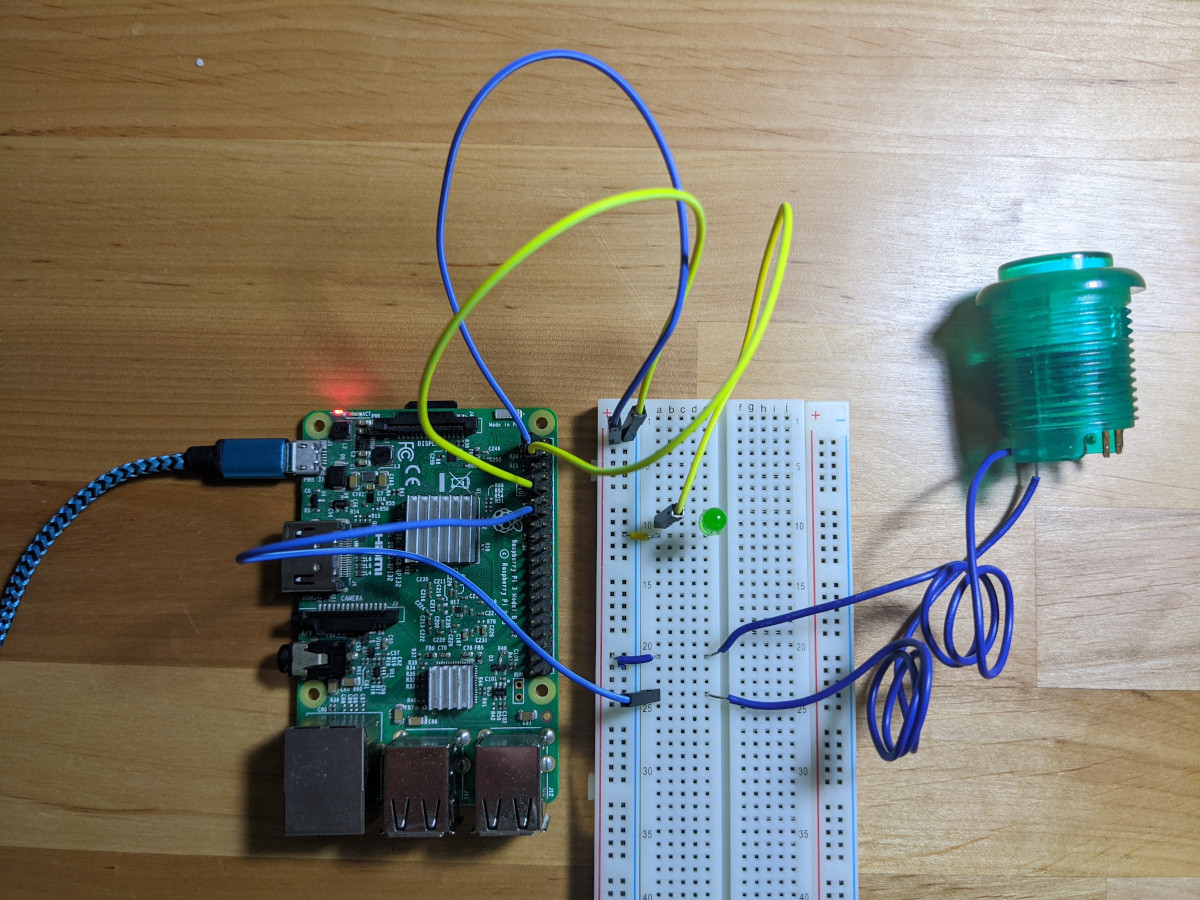 Here’s another explanation of the code. For the sake of brevity, the emphasis will be on the main changes compared to the last code breakdown.

And here’s the outcome!

Nobody would be using such an elaborate method to turn on and off a light when pressing a button: As mentioned in the introduction, a battery, light and button would do the trick. But consider this: I have shown how to read an input into Python, and how to provide an output from Python. You could apply the same logic with a multitude of other sensors to create your own IoT / smart device. Here are a couple of examples of sensors from a $45 CAD 37-sensors kit: 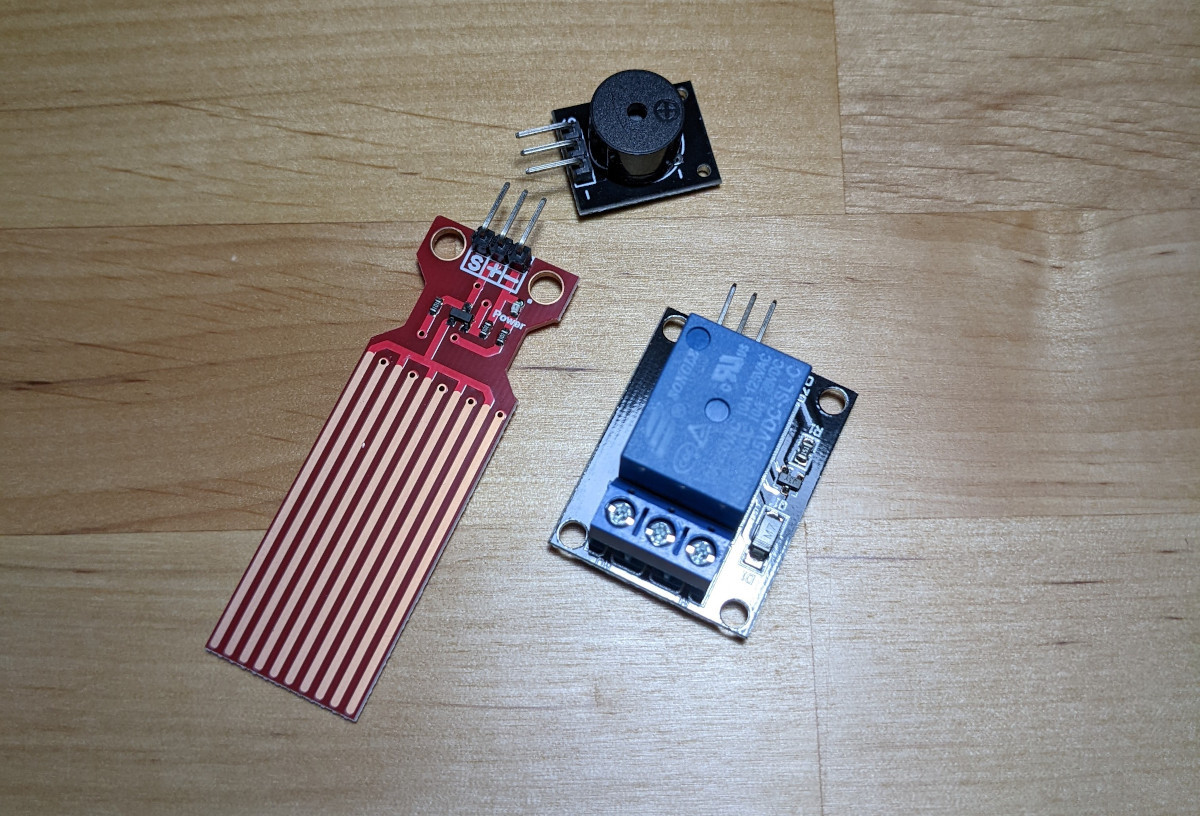 The water level sensor sends a non-zero voltage if there’s water detected. The passive buzzer emits a sound when a voltage is applied, and the relay lets 120 volts (the same voltages as home appliances in North America) go through only when a 3.3 volts signal is applied to the small pins.

With these three modules, you could easily design a system that detects if there’s flooding in an area, rings the buzzer, stops electricity from reaching nearby appliances and sends a notification through WiFi. At that point, your imagination (and the variety of sensors that exists) is the limit.